The utilisation of Copper in electrical equipment, machinery and construction continues to play a vital role in the building blocks of modern-day civilisation and our ultimate transition into a net-zero carbon economy. After all, there is no electrification without Copper.

Why do we call it Dr. Copper? Across the business cycle, copper is very highly correlated with global GDP and industrial production. Hence, the performance of the economy can be related to the price action of copper, due to the metal being a fundamental raw material. A case in point can be seen from history, as copper consumption surged upwards, along with GDP and IP, after the 2008 financial crisis.

To Watch our Dr. Copper Webinar

Copper is well distributed between industries such as construction (28%), electrical networks (28%), industrial machinery (11%), transport (12%) and consumer/general use (21%). It is widely utilised in electricity transmission due to its high electrical conductivity. Furthermore, it has fantastic heat transfer properties along with its malleable nature.

20 years ago, copper was under US$200 per tonne, and today the spot price is over US$7,000. However, the effects of pandemic response stimulus packages will be hugely significant for the performance of the metal. In 2020, the volume of stimulus versus 2008 is around 3x greater; the price of copper itself increased by 3x after the financial crisis, which begs the question: will there be a similar increase this time around?

In the short run, copper demand was not greatly affected on a global level. We saw a small 1.4- 1.5% decline in refined copper consumption globally. This was largely due to Chinese demand, which grew by 4% during the period (offsetting a drop in global demand of 7%). On the other hand, mine production decreased by 1.5-2% in 2020. Recovery after Covid will push copper demand further by an expected 3%, led by global growth and other drivers (covered later). This, along with expected increases in supply, will balance the copper market.

Going forward, a major driver of copper demand will be the electrification megatrend. The EU announced it wants to achieve carbon neutrality by 2050, whilst China has disclosed targets by 2060 and the US under a Biden administration is re-joining the Paris agreement and is expected to spend $2 trillion over the next 4 years on decarbonising initiatives. Lastly, Japan and South Korea aim to have carbon neutrality by 2050. Large, dominant countries all aim to move towards alternative energy and electrification, with clear implications for the base metals generally, but copper in particular.

In regard to the price action of copper over the last year, we saw a drop in mid-March of approximately $4500 per tonne; thereafter it started to increase until August, at which point it took a breather until November. Since November, copper has been trending up, coinciding with the Biden election win and the decarbonisation spending this implies. Investors are understanding the ramifications of these large global environmental pledges set by various countries.

Copper is used far more intensively in the manufacture of Electric Vehicles (EVs) than traditional transport models. In an Internal Combustion Engine (ICE) there is approximately 20kg of copper; a battery electric vehicle (BEV) uses around 80kg of copper, a fourfold increase mainly concentrated in the motor and wiring of the unit. Away from personal transport, battery-powered electric buses use 400kg of copper, reflecting their increased size.

Moreover, increased demand will come from the infrastructure needed to service this new market. BEV owners will require home chargers which necessitate 1-5kg of copper and a network of public superchargers will be rolled out, which requires over 500kg of the metal for each individual unit. It is worth noting that this is common across formats – whilst manufacturers are battling over the specific models, each one makes heavy use of copper.

Adoption of wind offshore will also increase copper use. In order to build 1 MW capacity of wind power, 15t of copper is required. Additionally, over the next 5 years 70GW per annum of wind power is expected to be installed globally, equating to additional copper demand of 105kT per year. Solar energy also requires large quantities of copper, approximately 4t of copper are used per MW generated from this source. 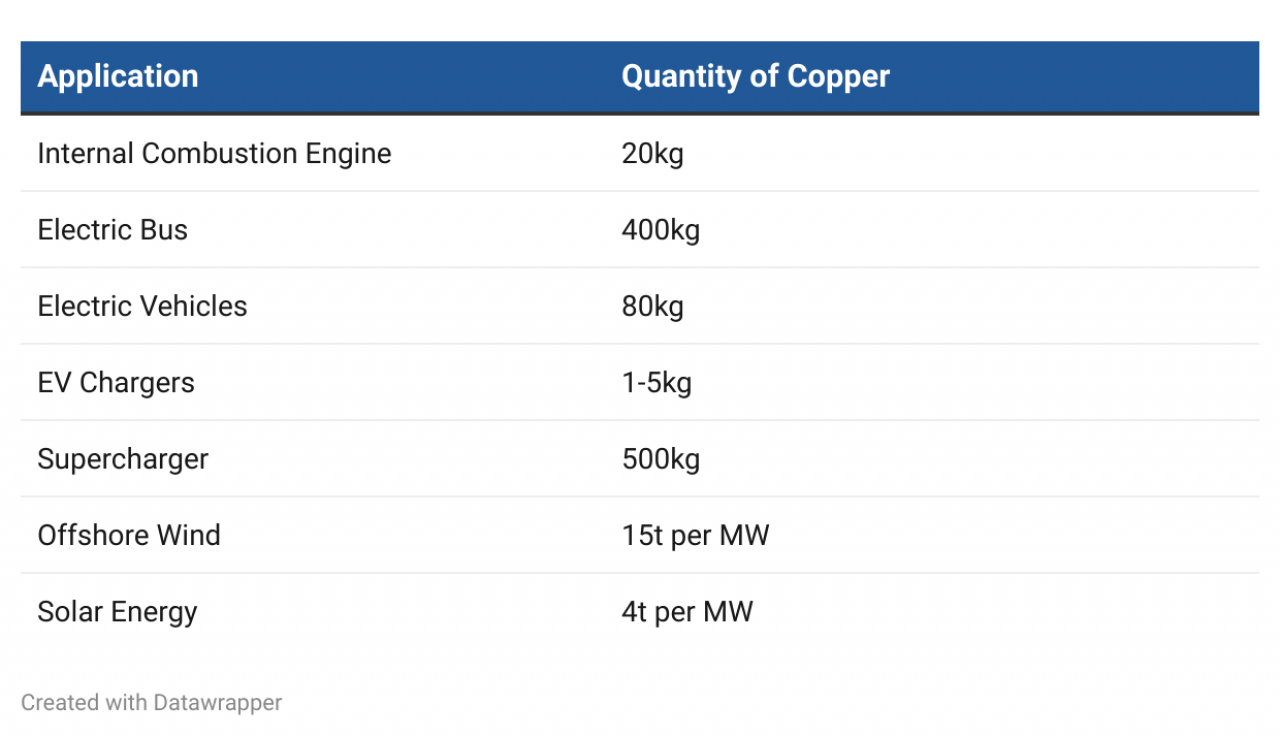 Copper demand in the long term

According to research from Norilsk Nickel, the CAGR of copper consumption per year, for next 20 years, will be above 2%. We are expecting that for the next 5 years we will see an increase of 1.4 Mt in demand of Copper and a further increase of 0.7 Mt by 2030 (through requirements in engines, batteries, wires and charging stations). A supply response is expected but higher incentive prices will be needed for new supply to come to market.

Higher prices of any commodity invite speculation and experimentation with cheaper substitutes, with aluminium being the closest substitute for copper. The Al:Cu price ratio is 4:1 but copper is seen as superior due to many of its physical properties. Firstly, it has a significantly higher electric conductivity, making it far better suited to usage in motors and wiring. This is compounded by its tensile strength being 40% higher, meaning its cables are more flexible, and in addition, they tend to be easier for soldering. Finally, Copper is also less sensitive to corrosion (and copper oxide conducts electricity, whereas aluminium oxide insulates) and has a lower coefficient of thermal expansion. Therefore, the viability of aluminium as a substitute for copper is limited.

At current price levels, over 90% of producers are cash positive (costs lower than prices). We must take into account mining inflation through copper grades declining and mines getting deeper, thereby raising costs. Producers must currently reinvest 20% of their margins back into the mine just to keep production flat. Additional supply must be incentivised by higher prices in the future, to make it economical to come to market.

Currently, investors can get exposure to the spot price of copper through ETPs which are swap based, not physically backed (like the GPF ETCs). Due to the swap costs, between a copper ETP and spot performance there is a 20% performance difference over a 10-year horizon. Swap-based products are an expensive way to gain exposure to metals. These costs are not present in physically backed ETCs.

All information and sources were via Norilsk Nickel.

Due to a restructuring of the Issuer where the Arranger and Metals Counterparty are being replaced, all primary and secondary market activity have been suspended as of Monday 25th April till further notice. Please see the official announcement here.